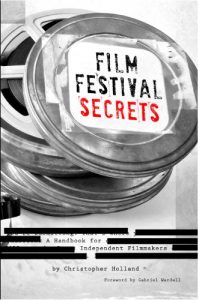 Every year thousands of filmmakers like you unleash their newly completed movies upon the film festival circuit. Whether you’re a first-timer with a comedy short or a seasoned veteran with a documentary feature, you all face the same set of problems. You all ask the same questions. You all want the pleasure of seeing your film play before a festival audience and gain the recognition it deserves. This is your book. Film Festival secrets will help you select the right festivals for your film, prepare your festival screener, save money on festival fees, create marketing collateral, and craft a screening sell out plan. And that’s just the beginning.