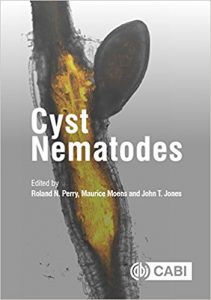 Roland N. Perry Professor Roland Perry is based at the University of Hertfordshire, UK. He graduated with a BSc (Hons) in zoology from Newcastle University, UK, where he also obtained a PhD in zoology on physiological aspects of desiccation survival of Ditylenchus spp. After a year’s postdoctoral research at Newcastle, he moved to Keele University, UK, where he taught parasitology; after 3 years at Keele, he was appointed to Rothamsted Experimental Station (now Rothamsted Research).
His research interests centred primarily on plant-parasitic nematodes, especially focusing on nematode hatching, sensory perception, behaviour and survival physiology, and several of his past PhD and postdoctoral students are currently involved in nematology research. He remained at Rothamsted until 2014, when he moved to the Department of Biological and Environmental Sciences, University of Hertfordshire.
He co-edited The Physiology and Biochemistry of Free-living and Plant-parasitic Nematodes (1998),
Root-knot Nematodes (2009), Molecular and Physiological Basis of Nematode Survival (2011) and the
first (2006) and second (2013) editions of the text book, Plant Nematology. He is author or co-author

This book contains 17 chapters focusing on the biological, taxonomic and molecular characteristics of the plant parasitic cyst nematodes. The importance of the development of environmentally acceptable ways to manage and control these pests are also discussed.