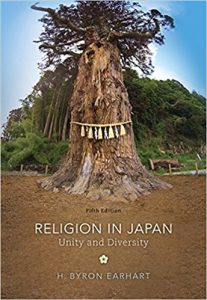 This standard text explores religion in Japan as a complex tapestry of different religious strands, reflecting both the unity and diversity of Japanese culture, a theme Earhart pioneered in the first edition (1969) of this enduring, classic book–a theme he has devoted subsequent decades to refining through cutting-edge scholarship and keen observation of the evolving religious scene. Tracing the development of religious traditions from the prehistoric era through modern times, Earhart explores the vital influence of Shinto, Buddhism, Daoism, Confucianism, and folk religion. Presuming no technical or academic background, the text guides students to key Japanese religious themes, which include the proximity of humans and gods, the religious character of the family, the bond between religion and the nation, and the pervasiveness of religion in everyday life. This new edition updates the description and interpretation of the entire history of religion in Japan in light of the latest developments in the field. In the latter chapters, changes in the contemporary scene are highlighted, discussing Tokyo Disneyland, manga, and anime as “alternative reality,” as well as the innovations in more “traditional” events such as wedding ceremonies and rites for the dead.